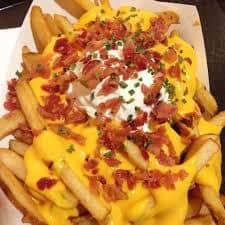 French Fries and Pornography: Another Lesson from Evolution

, recently came out with IVP-Academic. These posts are taken from his follow-up book (IVP, in progress) that deals with the practical implications of understanding evolution for the Christian life.

We all have instincts that seem to be misplaced in our contemporary human context. We are also faced with what Deirdre Barrett

calls supernormal stimuli—or, enhanced temptations that are nearly irresistible in light of our past instincts that we have not yet fully evolved out of.

This combination is a recipe for moral and spiritual disaster, and dare I say: unholiness. Let me explain it with an example.

Fast food French fries are the pornography of food.

Have you ever walked by a room where someone was cooking bacon? It’s absolutely irresistible. You start salivating and looking around to figure out where the smell is coming from. There are really good reasons for this. Bacon is high in protein and fat and has the calories to provide energy for a long time. Our ancestors were selected after generations had lived and died for such sustenance.

So, in a sense, we are hardwired to love fatty foods. We’re almost—and this word is really, really important—almost a slave to fatty foods. And fast food French fries are our food-master.

I say that French fries are the pornography of food because both fries and pornography work on similar human desires.

French fries are food-like substances that are ultimately unhealthy for us; pornography is a sex-like icon that is likewise unhealthy for us. French fries have all the glamorous and seductive parts of food—the fat, the salt, the sugar—but none of the substance that provides long lasting enjoyment or health. Pornography, in much the same way, possesses the glamorous and seductive aspects of a sexual relationship, but is at its core shallow and vapid—it is neither sex nor a relationship.

It shouldn’t surprise us then that both French fries and pornography are highly addictive. As a pastor and a professor working with college students, I can’t tell you how many times I have had to counsel people who have dependencies on food or pornography. Whether it be health complications or broken families, the supernormal stimuli that contemporary humankind faces are very destructive.

Remember, these supernormal stimuli are just that: supernormal. They aren’t natural. They’re conjured up in a lab full of people who know how to manipulate in us these ancient but no longer necessary proclivities. Advertising agencies know that Homo sapiens have evolved to desire copious amounts of sex and be attracted to visual stimuli. So sex is used to sell everything from blue jeans to waffle irons.

The fast food industry knows that Homo sapiens have needed fat, salt, and sugar to survive—that we fall into a kind of trance when we smell bacon or fries—and so they sell food products that are nearly irresistible.

Humans are in a predicament. We exist in a world in which we encounter both our mismatched instincts from ages ago and the supernormal stimuli of the 21st century. Deirdre Barrett, in her book Waistland: The (R)Evolutionary Science Behind Our Weight and Fitness Crisis

, expresses the problem in this way:

The most dangerous aspect of our modern diet arises from our ability to refine food. This is the link to drug, alcohol, and tobacco addictions. Coca doesn’t give South American Indians health problems when they brew or chew it. No one’s ruined his life eating poppy seeds. When grapes and grains were fermented lightly and occasionally, they presented a healthy pleasure, not a hazard. Salt, fat, sugar, and starch are not harmful in their natural contexts. It’s our modern ability to concentrate things like cocaine, heroin, alcohol—and food components—that turns them into a menace that our body is hardwired to crave.

See, our problem is a chimera of sorts—a Greek mythical multi-faceted creature composed of drives from our distant past combined with supernormal stimuli. It is a cocktail of temptation unprecedented in humankind’s history. This chimera is very difficult to combat, and—besides contributing to our gluttony and lust—it leads us to develop habits in our lives that pull us away from Christian virtues, from holy living.

But combat it we must, and the more we learn about where we come from the more we are able to do so. We believe God’s Spirit dwells with us, that we can be transformed and renewed; we can become better than we are. We are not slaves to our biology, no matter how strong the seduction of French fries seems to be.

This leads us to the conclusion—corroborated by both science and theology—that we are continuing to evolve. We are evolving biologically, to be sure, but we are also evolving spiritually toward a deeper sense of holiness (hopefully!). And, as Evolution and Holiness

discusses, these two dynamics—both biological evolution and spiritual development—can work in tandem for the greater good.