Will God Be Tailgating at the Super Bowl? (I’m going with no) 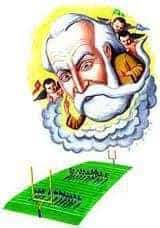 Red Letter Christians recently posted the statistic that 3 in 10 Americans believe God will play a role in determining which team wins the Super Bowl.

I could say something cute about how horribly shortsighted and ridiculous this is about God, because we all know God is really a baseball fan, but I won’t.

The Red Letter Christians post adds that about half of professional athletes believe that God rewards their faith by giving them health and success on the field.

Reading this gave me one of those “Really!?! with Seth and Amy” moments. I was a decent athlete back in the day, and I recall falling into the trap of praying that God would give me the victory on the pitching mound. Still I always sensed that God had better things to do than make sure I could spot my fastball (which he never quite did), so I eventually stopped.

My prayer morphed to, “Lord, please help me be less of a smack talking idiot while I play a game for the next 3 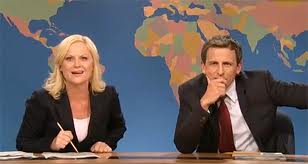 hours.” I’m not sure whether either of these prayers actually stuck, but the latter is better than the former.

I know this is cliche, but I will say it anyway. With all the pain and suffering in the world, on our streets, in our families, and in us, can we actually harbor–for even a moment–that God is open to be persuaded about the outcome of a game and the performance of individual athletes?

Sports, as they say, is a microcosm of life–which may be one reason why people think real life prayer can be transferred to a game. Or, perhaps sports is a microcosm of military conflict, so prayer for victory in a game is analogous to praying for victory in war (though, here, too I wonder whether God is rooting for one country to kill more people than the other country, but that’s another topic).

Or maybe we just so desperately want to have a God-sighting in our lives that we project our interest in sports onto God and wait for him to show up and throw back a cold one with us.

Whatever the reason, the theology that possesses one to conclude that God directs the outcome of sporting events rests somewhere on the spectrum of childishness—egocentrism—insanity.

I get the whole sports enthusiasm thing (have I mentioned lately I am a Yankee fan?). I want so badly for my team to win, but for Super Bowl fans, may I suggest tactics that seem to work well for me, like voodoo or some basic superstitions? I have documented proof that these rituals brought to NY 4 World Championships in 5 years from 1996-2000, and later sustained them over the Phillies in 2009.

Do what you have to do, but leave God out of it. Try not to think of  “Will God step in and give my team the victory? ?” as a subset of  the Problem of Evil (“Why does an all good and all powerful God let bad things happen?”). This isn’t that complicated. Just leave God out of it.

When the game is over, if you really want God hanging around, you can ask him what he thinks is important, what he wants you to do for him. One thing I know: it won’t involve the outcome of grown ups playing games.