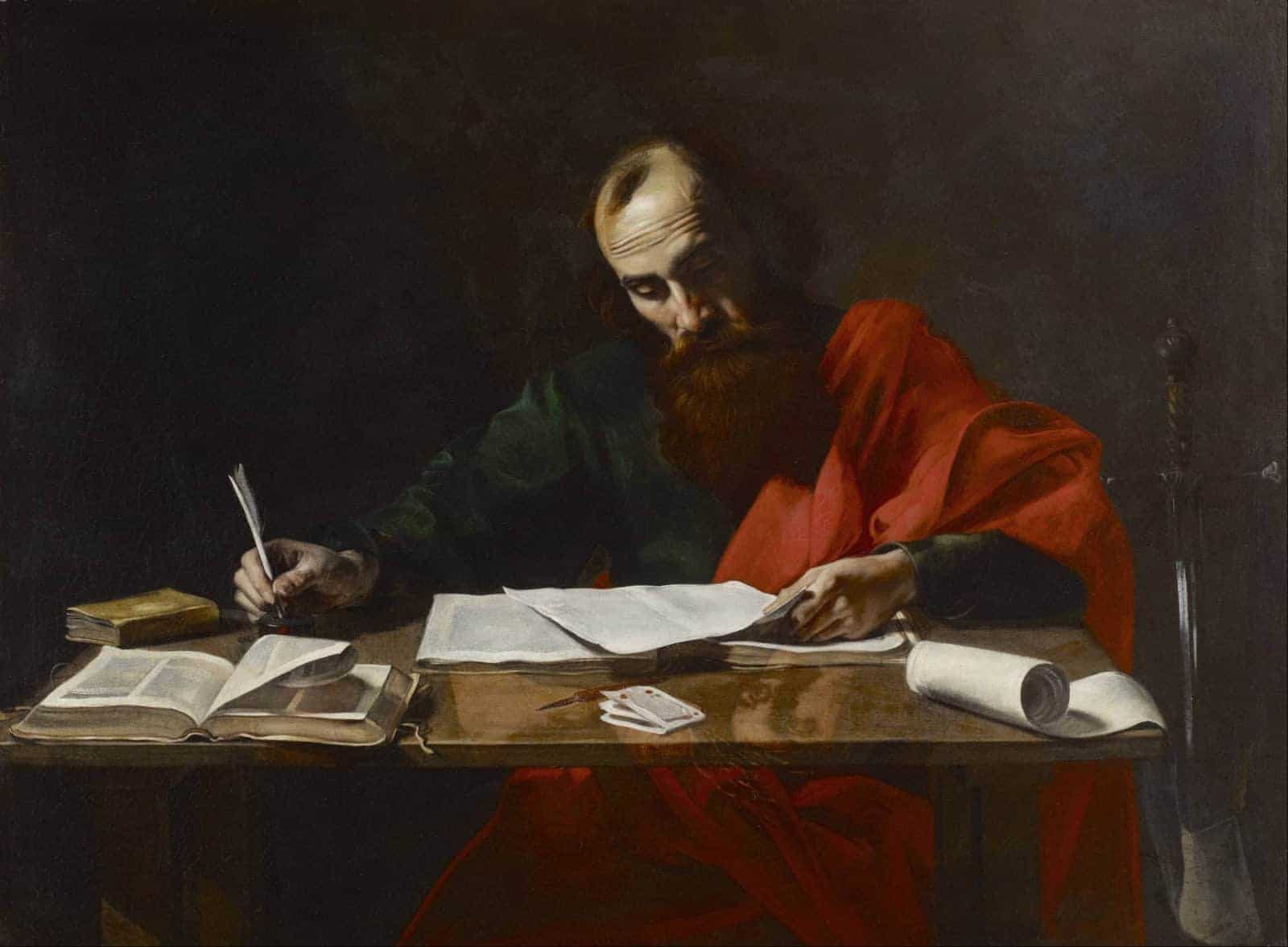 Paul: It Looks Like He’s Sort of Winging It

If you want to get into an argument, post something on the apostle Paul—especially the book of Romans.

Well, I don’t [really] want to get into an argument, but here it goes anyway.

As I read Romans, I don’t walk away thinking, “My, what a carefully planned out letter.” I think more, “Paul is winging it.”

I know that might not seem very reverent, especially since Romans is often thought of as the primo example of Paul at his difficult yet nevertheless logically consistent best, where he once and for all lays out the basics of the gospel for all to hear and for all time.

Not that Romans is a jumbled mess—may it never be (see what I did there?)—but to me Romans reads more like Paul is in creative-problem-solving mode for Roman Christians facing a pressing problem (how Jews and Gentiles make up one people of God

) than Paul sitting in his study writing a theological treatise intended for wider publication.

Here’s what I mean. Look at how Paul uses the Old Testament, which he does throughout the letter. It doesn’t take long before you get the impression that Paul is riffing, For example:

1. Abraham was declared righteous by faith (Genesis 15) before the command to circumcision (Genesis 17) and long before the Law of Moses. Hence, according to Paul, Abraham models that it’s always been about faith and not law keeping as the mark of being the true people of God (Romans 4). This is somewhat of a forced, selective, reading of the Abraham story (especially as he is hailed as a law keeper before Moses in Genesis 26:4-5).

2. Paul claims that, all along, Gentiles have been called by God right alongside of Jews and supports that claim by a string of Old Testament citations (Romans 9:25-29). But those passages (from Hosea and Isaiah) are not referring to Gentile inclusion but the restoration of repentant Israel.

3. To support his claim that Christ is the “end” (better “culmination” or “completion”) of the law, Paul pits two passages from Torah against each other. Leviticus 18:5, which speaks of obedience to Torah, is a “righteousness that comes from the law.” But the “righteousness that comes by faith” is about Christ, which Paul sees in Deuteronomy 30:11-14 (Romans 10:4-13). The problem is that the passage in Deuteronomy is about as strong a language as one can find about the dire consequences for not keeping the Law of Moses. Paul bypasses the clear meaning of that text—Torah obedience—in favor of a creative Christ-centered reading that marginalizes Torah obedience.

4. In Romans 11:26-27, Paul cites Isaiah 59:20-21 but changes one crucial word to allow him to make his theological point. In context, Isaiah speaks of God (the Deliverer) coming to Zion (Israel) to deliver them from Babylonian captivity. Paul, however, uses this passage to speak of a different kind of deliverance that will come not to Zion but out of Zion—meaning (I think) that the deliverance of both Jews and Gentiles originates with a Jewish Jesus.

We could go on.

Paul appeals to the Old Testament in order to support what is hardly an obvious notion to Jews at the time: that Jesus, a crucified and risen son of a working-class family, is the long-hoped for Jewish messiah and that Gentiles as Gentiles are full and equal partners along with Jews in this messianic age—meaning the only requirement is faith/trust in Jesus and not “zeal” for Torah (Romans 10:2-4).

Preaching that message is one thing. Saying, as Paul does relentlessly in Romans, that that message is already encoded into the Old Testament (provided one reads against the grain and/or beneath the surface) is something else altogether. Hence, Paul’s necessarily creative handling of Israel’s scriptures and traditions.

Making this sort of argument raised an even deeper problem: If encoded in the Old Testament is the gospel of Jesus—where Torah is decentered and the door is flung open to the Gentiles without their needing to uphold things like circumcision and dietary laws (both of which are commanded in the Old Testament)—then what’s so special about being a Jew?

Paul’s passionate argument for Jesus is too good: it puts Jesus in the place of Torah as central to God’s plan, thus calling into question the central place Torah plays in Israel’s scriptures and traditions. He has painted himself into a corner that he knows he has to get out of, especially if he hopes to keep his Jewish audience on board. Two examples:

First, in chapters 1-2, Paul passionately levels the playing field between Jews and Gentiles, that neither has the upper hand. In fact “real circumcision is a matter of the heart—it is spiritual and not literal” (Romans 2:29). With this kind of rhetoric, Paul is right to voice an anticipated question (3:1): “Then what advantage has the Jew? Or what is the value of circumcision? Much, in every way.” His answer (3:2) seems inadequate for truly answering the objection: “For in the first place, the Jews were entrusted with the oracles of God [Torah].”

OK, they have the Bible. Anything else? There is no “in the second and third place.” And then he flips back in verse 9 to say that Jews really aren’t better off at all, since “both Jews and Greeks are under the power of sin.” It’s not really clear where Paul stands on the true advantage of Jews have now that Jesus is raised from the dead.

Second, in chapter 6 Paul talks about the power of sin to which the unbeliever is enslaved, and from which one is freed by the gospel. In 7:1-7, however, Paul uses the same rhetoric to describe not sin but the Law of Moses—to which one is enslaved and from which we are “discharged” and given “new life of the Spirit” rather than being “slaves . . under the written code” (7:6). So it seems that sin and Law are two sides of the same coin for Paul, which is a shocking argument from a Jewish point of view.

And so Paul anticipates this objection and asks yet another rhetorical question (7:7), “What then should we say? That the law is sin?” Paul answers, “By no means!” but commentators (at least the ones I’ve read) see in the following verses (8-13) a rather unsatisfying attempt by Paul to extricate himself from he seems to have just done, namely equating law and sin, and thus potentially throwing the Old Testament under the bus. (It doesn’t help Paul’s case that earlier, in 5:20, he sums up the law’s value as revealing the depth of sin rather than being a solution.)

Paul has a few other such moments in the letter where he seems to be backpedaling. By the force of his excitement to preach the gospel, perhaps Paul ran ahead of himself.

Think about it. The more airtight Paul makes his argument (by citing the Old Testament) that it has been God’s plan all along to show no partiality (2:11; 3:21-31) to Jews, the more Jewish followers of Jesus might want to ask, “So, was all that back then about keeping the covenant just a big smokescreen? And what about all those Jews over the centuries who lived their lives according to Torah, some of whom were martyred—does that mean nothing?”

Paul’s argument threatened to call into question the very faithfulness, justice, and righteousness of God. “If this is the kind of about-face God can pull, is this God trustworthy?” Which is to ask, “Is this God at all?”

And so Paul finds himself having to defend God against that charge. His hand is forced by the resurrection of Jesus and he has to work it through—sometimes more clear and compelling, sometimes less so.

I have no problem reading the book of Romans and watching Paul work through—from the ground up, not the top down—a thorny problem caused by a crucified and risen messiah and the implications that has for both Jews and Gentiles.

I find a connection to Paul by seeing him work through the implications of the gospel, which is both born out of the scriptures and traditions of Judaism and that also moves in an utterly unexpected direction.

I like watching Paul deal with paradox and mystery and get tied up a bit trying to explain it. That tells us something about the nature of scripture that models that process

and the nature of Christian faith.

I teach Romans now and then at Eastern (including this semester), and for those interested, here are the text books I use.

. Johnson’s commentary is short, to the point, and a great undergraduate introduction to the scholarly conversation on Romans. Some of my students think it’s a bit dry, but what do they know.

Katherine Grieb, The Story of Romans: A Narrative Defense of God’s Righteousness

. Grieb’s book complements Johnson in that both see Romans not as a theological treatise but “a sustained argument or the righteousness of God that is identified with and demonstrated by the faithfulness of Jesus Christ, understood primarily as his willingness to suffer death on the cross” (p. ix).

This academic but lucidly written volume pushes my students to grapple with some pretty serious Romans scholarship, but more importantly helps them see the centrality of the resurrection for Paul’s thinking: “In Romans, the resurrection of Jesus becomes Paul’s key for demonstrating that the promises contained in the Scriptures have been fulfilled in the Christ event. Once we recognize that the gospel is couched in terms of the scriptually-attested resurrection of Jesus, we have the map we need for finding our way through Romans” (p. 8).