Has John Piper Changed his Mind about “It’s Right for God to Slaughter Women and Children Anytime He Pleases”? (I’m just asking because the page is missing)

I just noticed that the link to John Piper’s post “How Could God Kill Women and Children?” is now dead–and I do not wish to dwell on the irony of it.

Some of you may remember that I posted about Piper’s thoughts on Canaanite genocide during the summer, first here, with two follow up posts here and here. The gist of Piper’s argument with which I took issue is summarized in his opening line:

“It’s right for God to slaughter women and children anytime he pleases. God gives life and he takes life. Everybody who dies, dies because God wills that they die.”

This is how Piper explained God’s command (e.g., Deuteronomy 20:10-20) to exterminate the entire Canaanite population so the Israelites can take their land.

“God is taking life every day. He will take 50,000 lives today. Life is in God’s hand. God decides when your last heartbeat will be, and whether it ends through cancer or a bullet wound. God governs….

If I were to drop dead right now, or a suicide bomber downstairs were to blow this building up and I were blown into smithereens, God would have done me no wrong. He does no wrong to anybody when he takes their life, whether at 2 weeks or at age 92.

God is not beholden to us at all. He doesn’t owe us anything.”

As I said, the link is no longer active, and I am glad to see see it was taken down–or at least I assume it was deliberately taken down and not just a glitch. I will assume a deliberate decision was made to remove this post from Piper’s website.

I have looked for, but not found, an explanation for why it was taken down. Was this quietly removed because of the 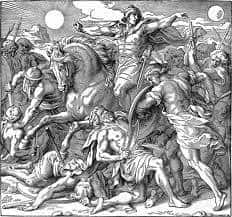 heat this was generating online (by others, not just me)? Did he get push back from people in his circle telling him it was a bad idea?

I don’t know. I’d like to think he changed his mind, that maybe he realized he needs to rethink his position on this very difficult issue. I hope that is the case, and I am going to assume so unless I hear otherwise. I choose to believe that Piper took down his post because he had misgivings about the content for theological and pastoral reasons.

I do feel, however, that Piper owes his readers an explanation for why the link is dead. If that explanation has been given and I missed it, I apologize in advance and would be very happy for someone to point me to it.