Finally: Positive BIBLICAL Proof that God is a Yankee Fan

[I posted this almost a year ago–soon after the World Series ended–and I needed solace. It is always good to know that, when all is said and done, God is on your side and you have the Bible to back you up.]

I offer these insights to you to encourage your faithfulness to God, and to exhort and admonish those of you who are not of like mind.

I offer you here undeniable biblical support that God is a Yankee fan, and I feel compelled–indeed, conscience bound–to bring this information to you, lest you continue to stray from the proper path.

Most of you miss this, because you have to know Hebrew to see it, and this is why you need me–someone who knows Hebrew and is sensitive enough to God’s leaning to tell you what you should believe.

Alert Bible readers know about Moses’ father-in-law in the book of Exodus. He is the Midianite priest Moses met after he fled Egypt and whose daughter, Zipporah, he married (Exodus chapter 2).

In Exodus 2:18 his name is given as Reuel. Then, just a few verses later (3:1), he is called Jethro. Why does this man have two names? Surely, this is unusual. Already our interpretive senses are heightened. What in the world could this mean? What is God telling us?

This will blow you away.

Most Bible translations at 4:18 simply repeat “Jethro” from 3:1, but this is wrong. The Hebrew of Jethro found in 3:1 is “yitro.” In English, the Hebrew “y'” becomes “j” which yields the conventional spelling “Jethro” (and thank goodness, or else The Beverly Hillbillies might never have existed, at least in its current form).

But the Hebrew at 4:18 is not “yitro” but  “yeter,” which becomes Jeter in English. So, the objective reader is forced to conclude that, not only is God a Yankee fan, but he has chosen the one called “Derek Jeter“–I mean, what are the odds, right?–of guiding the 1996 to present-day Yankees to their glorious success. 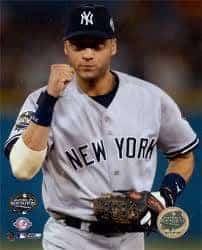 Most Bible translators, with an obvious bias, refuse to let Scripture speak for itself and replace “Jeter” with “Jethro.” My sense is that, in addition to spiritual rebellion, marketing factors are also at work. Translating the Bible as it should be would be too controversial and fewer Bibles would be sold. Mose people don’t want their Bibles to be controversial, even it if means sacrificing the clear intention of the biblical author in favor of profit.

I am outraged, as should you be.

So far I have given you nothing other than what the word of God plainly says. Still, rather than submitting yourself to Scripture’s teachings, many of you are thinking quickly about how to get out of this–putting yourself above Scripture, using a standard of interepretation that comes from outside of the Bible.

You say, “Well, if God is directing the current Yankee dynasty, why haven’t they won the World Series each year since 1996?” You ask because you do not understand the ways of God.

God’s promise to be with the Yankees during the reign of Jeter is never simply a 100% guarantee that things will work out. Yankee heartbreak in the post-season results from the signing of A-Rod, whom the Yankees welcomed into their camp in 2004 and who, inexplicably, has been allowed to dwell within their midst.

In doing so the Yankees have sinned greatly.

Yes, A-Rod (alternate name K-Rod) won the MVP twice since his co-regency began (2004 and 2007), but that was not for the greater good of the team but his own statistical aggrandizement. This and his doping displeased God greatly. His punishment has been a no-show in the post-season and the fact that his number will never be retired and he will never have a plaque in Moment Park (even though the Yankees retire numbers with great frequency).

All Yankee post-season tragedies since 2004–especially the humiliation of the loss to the Red Sox (which just “happens” to coincide with A-Rod’s first MVP–see what I mean!) are a direct result of allowing A-Rod to remain among them. The World Series victory in 2009 was simply evidence that God is even more displeased with the

Philadelphia Phillies, though the reasons for this are not disclosed, as it would detract from the dominant narrative.

Likewise, Yankee post-season losses before A-Rod are all part of God’s mysterious plan for his team and in the end all things will be made plain. The 2001 World Series, however, remains a object of fear and trepidation for Yankee Nation, a topic of theodicean proportions for all the faithful, a reminder that we do not serve a God who is tame and does as we expect, but who is free to do as he pleases.

None of these “exceptions” deter the least bit from what Scripture clearly teaches, and all such seeming “contradictions” of history are to be understood in light of and subordinated to the plain and obvious teaching of Scripture.

At any rate, explaining how everything works together is not easy, and this is why we have seminaries that train people like me to read the Bible in the original languages, who are then equipped to make penetrating observations like this. You’re welcome.

I am God’s servant, simply informing you of what God says. It is up to you to decide whether you listen or not.

[Note to those of you with no sense of humor (the rest can skip this): I am kidding here about God and the Yankees. I don’t actually think you can prove God is a Yankee fan from Exodus 4:18 or any other Bible passage. I don’t think God cares about baseball.

This post is a parody. I am poking fun at a principle of biblical interpretation I see at work–virtually every day–though always unstated, namely:

Such an interpretive principle is not the sole property of untrained Bible readers, but of highly visible church leaders and even those with academic training. “I know what I believe, so let’s go find it.”

I know that you could read this post as poking fun God and the Bible. But I’m not. I am poking fun at how some people interpret the Bible.]