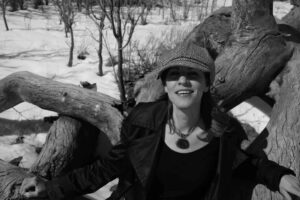 Meet Nancy Hightower. I met Nancy, a writer with a Ph.D. in English from the University of Denver, several years ago now. She was leaving her position at a college in Colorado to write and teach in NYC. I was very interested in her take on creativity, Christianity, and her interest in the art and literary genre of “the grotesque.” Her book of poems around Old Testament narratives, The Acolyte, was published in 2015. Here is an interview we recently exchanged:

You have taught college courses on the grotesque. I grew up in a Christian culture where that would have been off-limits for Christians. How does that area of study integrate or affect your faith?

The “grotesque” as an adjective gets thrown around a lot to describe something bizarre, gross, or even obscene. I teach the grotesque within the theoretical framework partially established by Flannery O’Connor and Geoffrey Galt Harpham, who describe the grotesque as a unique kind of distortion that reveals new paradigms to us. I take that theory a step further and argue the grotesque is meant to destroy the line between us and the Other, any one we have deemed as less than us (whether they are Republican, Democrat, the people that shop at Walmart who are so often held up to mocking, etc.). So for me, the grotesque falls in line with the greatest commandment to love others as ourselves; it is the aesthetic which plays on the boundary we’ve constructed around that “other.”

Your book of poems, The Acolyte, is a take on various biblical stories. But you’ve also written a lot of fiction. As an artist, how does your Christianity inform your art?

I grew up in the evangelical South, and my family worked for three televangelists, so my relationship with Christianity is complicated, to say the least. I was also taught to memorize the scriptures that reinforced God’s judgement and terror (and trust me, there are some doozies in there). Quite a bit of my fiction might resemble Flannery O’Connor’s in that I’m struggling with the hypocrisy of the church, as well as my own hypocrisy, while trying to move forward on a spiritual journey.

I believe that faith, like art, is guided as much by doubt as it is by belief. I don’t consider myself a Christian writer (whatever that may mean). I’m a writer who also happens to be a Christian. In writing The Acolyte, I was influenced as much by Denise Levertov’s Candles in Babylon as I was Ann Sexton’s Transformations.

Are many of your colleagues religious? If not, how do you navigate those relationships in the academy?

I am an academic and a writer, so most of my colleagues do not identify as Christian (and in this election-driven climate, where the term Christian is often associated with a particular political agenda, even I am loathe to use that label). I find myself drawn towards conversations around social justice, and am encouraged at how that discourse is bringing people of all beliefs to work together.

Why did you write The Acolyte? What was happening in your life when you wrote it? Some might say you are “reading into” the biblical stories in your poems. How might you respond?

I was in a lot of physical pain when I began reading and annotating the narratives in the Old Testament. Maybe it was feeling so broken that allowed me to see the sorrow in the stories of Leah (who wanted so badly for Jacob to love her, or Moses who almost made it to the Promised Land, and then was denied entry—after 40 years of wandering in the desert).

Sunday school lessons often left out the women (I have yet to hear a sermon on Tamar), and rarely talked about the characters as actually human, as having the range of emotions that we have today—anger, fear, panic, feeling like freaks, and at times, acting like freaks. Reading the Old Testament reminded me very much of what Flannery O’Connor does in her fiction: God loves the freak.

Nancy has published short fiction and poetry in journals such as storySouth, Sundog Lit, Gargoyle, and Word Riot. Her novel, Elementarí Rising (2013), received a starred review in Library Journal and her collection of poems, The Acolyte (2015), was published in 2015. Currently, she reviews science fiction and fantasy for The Washington Post and teaches at Hunter College.