I just came across a brief but insightful interview at the Collegeville Institute for Ecumencial and Cultural Research. Janet Kragt Bakker interviews Christopher Southgate on the how Christian faith engages theologically the harsh realities of evolutionary theory, namely extinction, suffering, and cruelty in the animal world. Southgate is a biochemist, poet, and Christian theologian. He is currently a research fellow at the University of Exeter in England. He addresses directly the question of non-human suffering in his 2008 book The Groaning of Creation: God, Evolution, and the Problem of Evil

The question of the “historical Adam,” which tends to preoccupy evangelical circles, is child’s play compared to the larger and well known philosophical/theological issues that evolution introduces to the Christian view of God, namely: why does God not simply “allow” animal suffering, but why is animal suffering an inextricable element of the evolutionary scheme that, as Christian evolutionists says, is God’s way of creating?

A couple of quotes from the interview:

So much attention, very understandably, has been given to the problem of human suffering, but the fact that the natural world that the good and loving God has created is nevertheless “red in tooth and claw,” has received very little attention, and it needs some hard thinking through.

…perhaps 99 percent of all the species that have ever existed have gone extinct. The evolutionary process has generated incredible value, but what might be termed “disvalue” is bound up with the value. This makes creation ambiguous.

I don’t believe that God is good and loving because of what I see in the natural world, but rather because of my own experience as a Christian and my convictions about the person of Jesus. My challenge is to 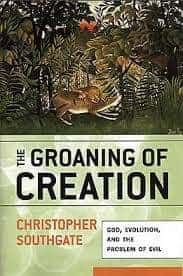 reconcile the ambiguous picture of the natural world with the character of the good and loving God I know from scripture and experience. I need to be prepared for my view of God to be changed by my reflections. That’s the price of theology.

I’ve been quite clear in my contention that some of the traditional approaches to theodicy, especially with regard to animal suffering, simply don’t work. It doesn’t work to sentimentalize animal suffering through what I call “Bambi theology”, to pretend that animals don’t suffer, or to suppose that the suffering of animals doesn’t matter. Nor does it work to suppose that suffering is, in some way, the result of some sort of foreign event such as the human fall into sin.

I believe that God is very close to every living creature and every living creature’s experience. We get just a hint of the character of God’s suffering with the world when we look at the passion of Jesus, in which he suffered for the sake of others. This gives us a visual aid to help us understand what we can never fully grasp, God’s intimate relationship with creatures.

Anyway, be sure to go to the interview itself and read it in full. Whether Southgate has cracked the code or not is not for me to say, but I learned some things from reading it and suppose many of you may too.