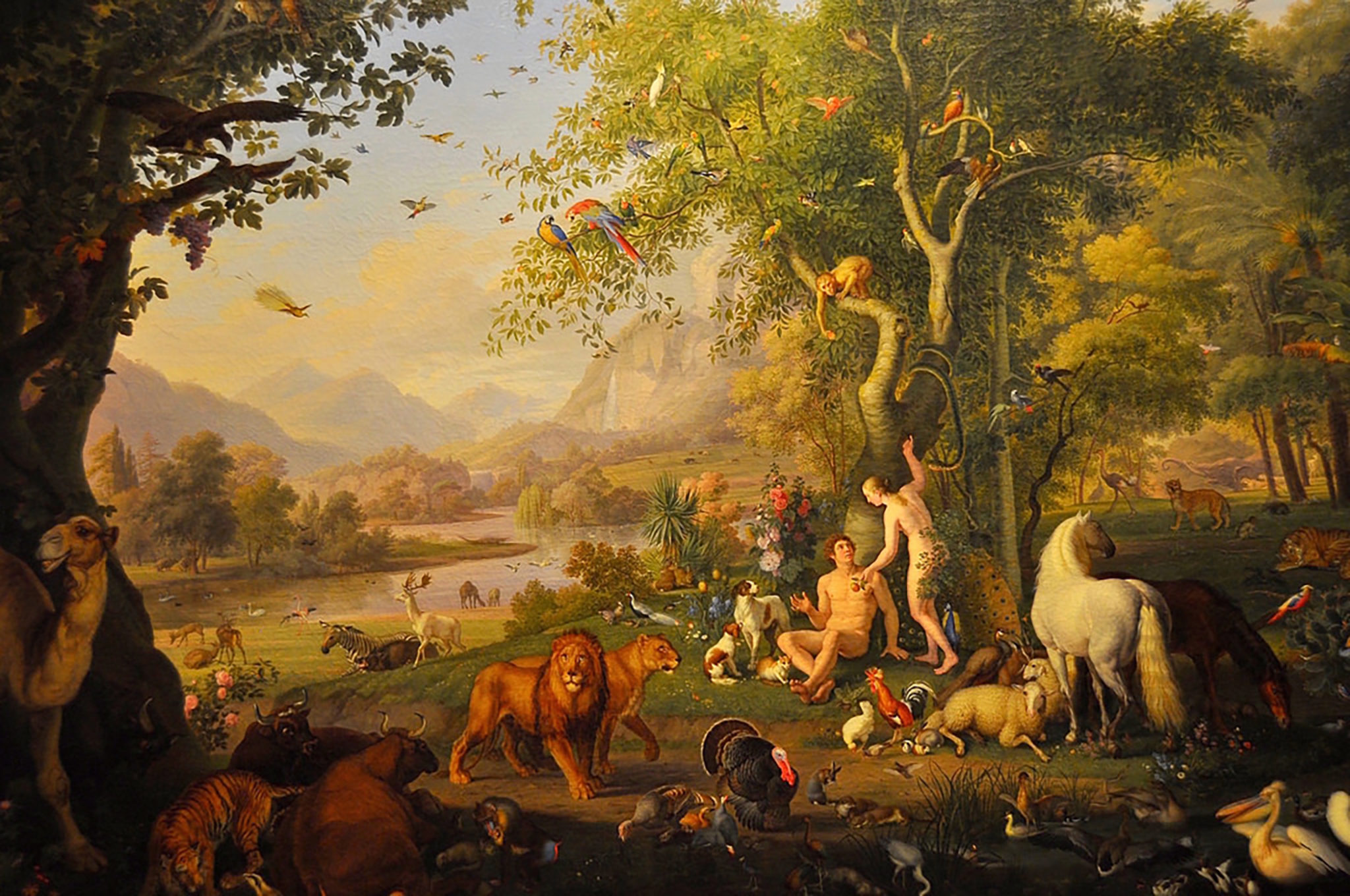 I think I’ve always been a bit uneasy with the idea that God holds me responsible for something Adam did at the beginning of the Bible. I know God’s ways are not my ways, but this never made much sense.

Of course, my uneasiness doesn’t make something right or wrong. I’m just putting it out there.

Of course, I’m talking about “original sin”—the idea all humans are the objects of God’s anger from conception on because Adam’s deed of disobedience in the Garden of Eden has hardwired sinfulness into us all. Not only that, but for many Christians, original sin also means humans actually bear the guilt of what Adam did—which takes this to yet another level.

That seems rather alarming if true, and thus raises the question: does the Bible actually say this?: Where in Genesis or in the Old Testament as a whole is Adam’s disobedience in the Garden of Eden described as the cause of universal human sinfulness and guilt?

For much of my adult life, my subconscious mind never allowed myself to look at this issue too carefully, I think for fear of what I might find. But several years ago, as I was writing The Evolution of Adam

, I didn’t have much of a choice but to pony up.

Now, before I go on, let’s be clear about a couple of things. First, I’m only asking whether the Old Testament paints Adam as the one to blame for all the misery of the human race. I’m not talking about what the New Testament says about Adam (namely Romans 5:12-21, which is hardly the clearest passage we’ll ever read in the NT, but I digress).

Second, by wondering out loud about “original sin” I’m not saying “I’m OK, you’re OK, and God’s OK with it all, so let’s just get along.”

I believe that what the Bible calls “sin” is real—and you don’t have to read about Hitler, Stalin, or George Steinbrenner to find examples. Each of us carries around an alarming ability to harm each other in a seemingly non-stop variety of new and inventive ways.

Add to that the endless capacity we have to find ways to be miserable and harm ourselves. Few are truly at peace with themselves. The biochemical and environmental contributors to the common list of emotional struggles we face betray a deep sense of disquiet in our own hearts. We are all “sinners”—we all bear witness that things are not as they could be and we bear that burden daily.

Whatever words we want to use to describe it, this self-evident reality of repeated, relentless sin remains a consistent fact of human existence. We clearly need help. The Gospel is about what God has done through Jesus to come to our rescue.

But all I’m asking here is whether the Old Testament says that Adam is the cause of it all. It doesn’t. Not at all. Not even a hint.

1. Inherited sinfulness is not one of the curses on Adam.

Adam is introduced in Genesis 2, and for one chapter seems to hold it together. But then in chapter 3, Eve is outcrafted by the talking serpent, takes a bite of the forbidden fruit, and then hands it to Adam, who does likewise.

All three parties are cursed by God for this act of disobedience, and those curses have lasting consequences for the human drama. Fair enough, but note the consequences for Adam: from now (1) growing food will be hard work, and (2) death will be a fact of life.

Note what is not said: “And a third thing, Adam. From now on all humanity will be stained by your act of disobedience, born in a hopeless and helpless state of sin, objects of my displeasure and wrath.” If Genesis did say that, it would clear up a lot. But it doesn’t.

2. Throughout the Old Testament, pleasing God through obedience is both expected, commanded, and doable.

Nowhere in the Old Testament do we read that humanity is under God’s condemnation simply by being born and therefore helpless to do anything about it, and thus no actions are truly pleasing to God.

[And don’t even bring up that one verse, Psalm 51:5. That’s not the prooftext for original sin in the Old Testament but David’s hyperbole after the Bathsheba incident.]

Yes indeed, God is terribly mad about sinful acts, especially when his people, the Israelites, do them. But—and I can’t stress this enough—implicit in all of God’s acts of wrath and punishment is the idea that the Israelites were most certainly capable of not sinning. That’s the whole point of the law: follow it and be blessed, disobey and be cursed. The choice is clear and attainable, so do the right thing.

[For example, see Deuteronomy 30:11-20: the Law God has given the Israelites isn’t far off across the ocean or way up in the heavens, but it is “very near to you; it is in your mouth and in your heart for you to observe” (v. 14).]

In fact, some Old Testament figures actually seem to pull it off pretty well: Enoch, Noah, Abraham, Moses, and David. No, they weren’t “perfect” but that’s exactly the point. God seems fine with some of his people getting it basically right and using them for some key task. Nowhere does God say to these people, “Great effort guys, but . .. you know . . . that Adam thing. Sorry. My eternal wrath remains upon you.”

3. With one exception, Adam disappears after Genesis 5.

After Genesis 5, Adam wanders off the Old Testament stage until 1 Chronicles 1:1, the beginning of the nine-chapter list of names in 1 Chronicles 1-9. Adam’s name is first (of course), but he’s just one name along with the pages of other names. He’s not the bad guy.

Throughout the entire rest of the Old Testament story, Adam doesn’t even warrant a mention. If Adam was really the person who set the whole world on a downward sin cycle, again, I’m not sure why it’s kept such a big secret.

Some argue “Adam’s sin and its consequences don’t have to be mentioned because they are obvious.” To be blunt, that is nonsense—especially given #2.

4. Adam is not blamed for Cain’s act of murder.

Back to Genesis. Adam’s son Cain killed his brother Abel. Here we have the immediate follow-up story to Adam and Eve and where his great sin is committed.

If Cain’s act were caused by a hardwired state of sinfulness due to what Adam did, here is where you would mention it—at least hint at it. Instead, Cain’s act is seen as a repeat of Adam’s disobedience (there is a lot of overlap in vocabulary between chapters 3 and 4) rather than a result.

God asks Cain, “Why are you angry?” as if it’s not obvious, and then offers Cain the same choice the law would later offer the Israelites.” You’ve got a choice, Cain. Make it a good one.” He didn’t. And the fact that Adam already “had it in him” to disobey suggests that Cain’s choice to sin was, like his father’s, not imposed on him from elsewhere.

5. Likewise, Adam is not blamed for the flood.

God wipes out all life in a flood because of the complete and thorough mess humans have made of it all. But look at Genesis 6:6-7. There we see that this escalation of sinfulness, which has now reached its boiling point, seems to take God by surprise.

He doesn’t say, “Well, of course, we all saw this coming, what with Adam’s disobedience in the Garden and all. I just wanted it to get really bad before I acted.” Rather, God is “grieved” and “sorry” about how out of hand all this has gotten.

Bottom line, there is ample time in the OT to say what so many people think the Bible says but in fact never does.

I know how some will respond to all this:

“But what about Paul!?” Fair enough, in Romans 5:12-21 Paul does mention Adam’s disobedience as having a universal effect—but that effect is “death” not “inherited sinfulness.” And even if Paul sees Adam as the cause of human misery and alienation from God (which I don’t think is the best reading of Romans 5), we still need to grapple with why the Old Testament doesn’t see it that way. Paul, regardless of how he is interpreted, doesn’t make 1-5 above go away.

Others will respond: “But if Adam isn’t the cause of it all, we no longer have a good explanation for why people are so messed up?” Agreed, but that doesn’t mean we would settle for a bad answer just so we can have one. The fact that questions arise that muddle our theology doesn’t make the Old Testament magically fall into line.

[Incidentally, Jewish theology simply says that humans are “inclined” toward “evil”—aka the “evil inclination,” which is the language taken from the Flood story in Genesis 6:5, “The LORD saw that the wickedness of humankind was great in the earth, and that every inclination of the thoughts of their hearts was only evil continually.” Sin is seen as a fact, but—wisely—no attempt is made to explain where this “evil inclination” came from. It does not have a cause. It is, rather, a fact of existence.]

Still others will respond: “But without Adam as the cause of human sinfulness, the entire gospel falls apart.” I disagree. Rather, I think only a version of the gospel that needs this kind of Adam falls apart. Perhaps there are other ways (and there are).

I’m raising nothing new here—and I treat it all in a bit more detail in The Evolution of Adam—but as far as I am concerned these are rather obvious problems to be dealt with, especially for those who claim that the Bible forms their theology.

Want to learn more? Try this course: Jesus and the Old Testament