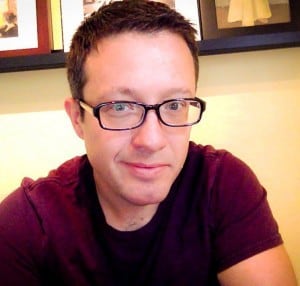 Today’s post is an interview with Brandon Withrow, who teaches religious studies at the University of Findlay, about his latest book Consider No Evil: Two Faith Traditions and the Problem of Academic Freedom in Religious Higher Education

(co-authored with Menachem Wecker). Withrow and Wecker examine seminaries affiliated with two faith traditions–Christian and Jewish–and explore the challenges, as well as prospective solutions, confronting those religious academies when they grapple with staying true to their traditions, as they interpret them, while providing an arena that incubates honest and serious scholarship [from the Amazon description].

Withrow is also the author of Becoming Divine: Jonathan Edwards’s Incarnational Spirituality within the Christian Tradition (Cascade, 2011) andKatherine Parr: A Guided Tour of the Life and Thought of a Reformation Queen (2009). He regularly blogs at The Discarded Image, and more author information can be found at his author blog.

Consider No Evil  just released in July. Tell us what it’s  about and why you think we need a book on this subject at this time.

Consider No Evil assesses the ongoing problem of academic freedom in religious institutions. My co-author, Menachem Wecker, and I limit our scope to the traditions within which we were raised – mine conservative and Reformed-Evangelical, and his Orthodox Jewish.

We look at the historical connections between religion and higher education and offer solutions to recent, often highly publicized disputes. For example, in one chapter I explore the historical role of theology as the so-called “queen of the sciences” in the development of Western education and how that informs current disputes in Evangelical institutions.

We felt the book was necessary because the last decade has seen a reinvigorated conservatism in schools like Shorter University, Cedarville University, Calvin College, Bryan College, and – as you know – Westminster Theological Seminary.

Due to the now-prominent “share” button on news reports, these stories get broader attention than they did in the past, and we wanted to help set some context – and hopefully offer a saner, historically contextualized perspective – for those stories.

Having just left my faculty position in an Evangelical school, I no longer consider myself 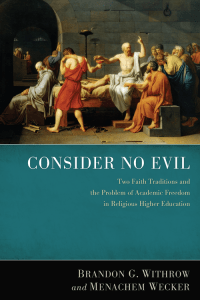 part of the Evangelical world, but I still have many colleagues and friends in schools racked by theological divisions. From my vantage point, these divisions are thorny issues that are not going away anytime soon, and they’re causing real pain to good people.

As you note, you and your co-author were raised in different faith traditions. What prompted you to write a book on academic freedom together?

Our backgrounds are different in many ways, but our friendship developed over the similarities we found in how we were raised, the importance placed on certain values, and the situations we experienced as students within religious schools. We met online in early 2008, when he interviewed me for an article. After that, we had ongoing conversations (mostly via Twitter) about theology and the boundaries of theological education.

Our background similarities, and my role as faculty in a theological institution and his as an education reporter for U.S. News organically led to the idea for the book. We didn’t actually meet in person until we signed the contract for this book at the National Press Club in D.C. in 2012.

Your first chapters of the book are autobiographical, looking at your traditions and your experience as students. Many writers say autobiography is a painful writing process. How would you describe it? Did you learn anything about yourself in writing it?

Writing something autobiographical, even just the short chapter that opens this book, is very difficult, especially when that chapter serves as a way of telling the reader about your own biases. You want to be honest about what you saw in your upbringing, in your education at Christian schools (good and bad), and how you feel about it, but you become painfully aware that all history is interpreted.

I also discovered that the path I took in life was the most likely route given my background as a pastor’s kid with a strong interest in theology. My decisions to attend several Evangelical schools were part of a logical path; even if I now wish I had taken other routes, there’s no changing the past. Just own it. That’s what I’ve tried to do here.

What conclusions did you draw? Did you begin your book knowing what solutions you were going to offer regarding controversy within Christian higher education, or did you surprise yourself when the dust settled?

I originally found myself outlining responses with a sort of “screw you, stop being so medieval” mentality, but I do realize that my admittedly more free thought approach to life is not possible for a theological institution. In most cases, the theological is the first reason for an institution’s existence, and the faith statement is the top qualification when considering faculty.

Placing restrictions on faculty beliefs – keeping biology professors from teaching evolution, for example – may be consistent with a school’s faith perspective. So while I think creationism is theology and not science, it still may be a core belief or value of a school. (But by the way, that also says something about the value of a science degree from that school.)

What should also be a core value of a Christian school, however, is that of a high standard of community love and care. In many non-faith based schools, shared governance, longer-term rolling contracts, and tenure are there to (theoretically) protect faculty.

Many conservative Evangelical schools, however, seem dead-set on making it as easy as possible to get rid of faculty at a moment’s notice, knowing full well that the court system in the U.S. often won’t decide on cases if they are parsed as religious issues. Many of these schools don’t even pay into unemployment.

So one of the points I make in the book is that if you want to say your religion makes the world better, then you really should try to prove it by helping your community members to thrive rather than looking for every legal loophole to get rid of them.

To be fair, it can be easy to focus only on bad institutional behavior and miss the need to address faculty responsibly. So I spend time looking at that in Consider No Evil as well. Faculty need to acknowledge when it is time to move on.

Maybe a school changes the rules mid-game due to a new conservative president or overly controlling board member or donor, or attempts to break contracts, and so there is reason for that professor to challenge these changes or fight for the community. But maybe the problem is not due to the school’s changes, but the faculty member’s new outlook.

Not all issues are hills to die on, but if a professor ventures far enough, then he or she needs to be honest with himself or herself about those changes and perhaps move on, for everyone’s sake.

Are there any misconceptions you feel those outside of Evangelicalism might have about the shake-ups that occur at Evangelical schools over issues like evolution or gender equality?

I think it is necessary to realize that few people enter into disputes because they consciously want to abuse power or make enemies. We are all the heroes of our own stories, even if that perspective is part of groupthink and unacknowledged prejudices.

This doesn’t mean that theology isn’t sometimes used to justify a narrative or to reinforce a power-base, but those involved may not see it as such right away. If you want to understand why these situations occur, you have to start by seeing the players as people acting for what they believe (rightly or wrongly) is a noble cause.

What do you hope Evangelical academics will take away from reading your book?

My message to faculty at these institutions is, know what you’re getting into. If you’re the kind of person that plans to keep exploring ideas, know that this will eventually catch up with you in an institution that puts your doctrinal assent before your scholarship, training or pedagogical acumen.

Evangelical institutions have the right to organize themselves according to their beliefs. But to the administration and boards of these schools, I say, if your stated beliefs don’t match your actions, and you push faculty out with little regard for their circumstances or stop loving your neighbor over your pet doctrines, then you lose all credibility.

Take a page from Google’s motto and “Don’t be evil.”