I found it hard to get to sleep last night. The horror in Paris is to say the least unsettling and disorienting. What is happening in our world? How can it be stopped? Why do people do these things to each other? The last time I felt like this was in December 2012.

Because I am a Christian and thinking about the Bible is what I do, my mind turns to a biblically informed faith and what that even means at times like this.

So here’s what I think.

I love the Bible and I take it seriously.

For me, taking the Bible seriously means looking head on at its persistent themes of mass violence and retribution—whether by God’s hand (e.g., the Flood, Genesis 6), God’s command (e.g., extermination of the Canaanites, Deuteronomy 20), or God’s silent approval (e.g., taking women and children captive as spoils of war, Numbers 31).

For Christians, I believe that condemning mass, ideologically driven, and horrific violence today means taking on the responsibility of deconstructing the violence in the Bible.

—to be able to speak with integrity of our God who we believe condemns mass violence today but who is said to have commanded it long ago.

It is our Christian responsibility to take this on and not avoid it.

—to interrogate our Bible and debate with it (as Jews have a long history of doing) rather than treating it as a go-to source book of immutable information and where all parts have equal ultimacy.

—to reflect on what it says, work with others and make sober Christian decisions about what it means live and speak faithfully today and to be in step with the Spirit of God, who, as we learn in Job and elsewhere, is never simply confined to the boundaries of traditional God-talk, including when that God-talk has Bible verses to back it up.

I’ve taken a few stabs at addressing violence in part of the Christian Bible (what Christians conventionally call the Old Testament) in some 30 blog posts and in a book, The Bible Tells Me So. In recent years it’s been sort of theme in evangelical Christian publishing, which I am glad to be a part of, including authors like Brian Zahnd

, and many, many others.

And it has to be done. Not in order to dismiss Scripture, but to demystify it so we can understand it. 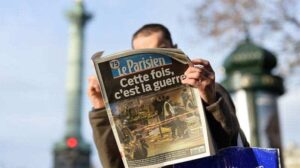 To see that within the pages of the Old Testament itself, a conversation is developing over what God thinks of “outsiders” and what it means to be Israelites on the world stage rather than in tribal seclusion.

I think here of the old “children’s story” of Jonah being swallowed by a fish because he refused to preach repentance and God’s love to the heinous Ninevites, even though just pages further on we have the prophet Nahum glorying in the violent destruction of Ninevah at God’s hand.

Jonah is a more “globally aware” book, written many years after the Babylonian exile, where the Judahite captives came to reflect on their God and whether that God is out to kill the world or save it.

The New Testament, I would argue, is not on the same page as the Old when it comes to mass military violence toward other peoples. In fact it’s turned that page altogether. But neither does it get a free pass.

At the hands of the Gospel writers, in different ways and varying degrees, Jesus’s rhetoric also exhibits violence—though not as persistently and not against the world out there. The Gospel rhetoric of violence on Jesus’s lips is aimed at his fellow Jews for not understanding that he was God’s chosen messiah. 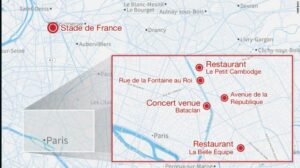 Christians today must also assume the responsibility of wrestling with the Gospel rhetoric, too, and determining when, if, or whether it should remain as part of our own rhetoric.

The book of Revelation is, of course, a book of violence and retribution throughout, at one point noting that the blood, the “wine of God’s wrath,” will run on the street for 200 miles as high as a horse’s bridle (Revelation 14:20). This is why I have not sung and never will sing again “The Battle Hymn of the Republic,” which adopts this exact biblical rhetoric for ideological purposes.

Christians need to look at the book square in the eye and determine whether that rhetoric should be ours and whether this is the most fitting and valid description of God. Christians must wrestle with the very genre of ancient apocalyptic thinking with it’s inherent rhetoric of violence to describe the overthrow of evil, in this case the oppressive Roman Empire.

I have to wrestle with it, because, frankly, I have no problem at the moment replacing the Roman Empire in Revelation with ISIS saying, “Have at it, Lamb of God, One like the Son of Man, Alpha and Omega, the One Who Is and Who Was and Who Is to Come. Get those guys. Wipe them off the face of the earth.”

For Christian who love the Bible and take the Bible seriously, we have some wrestling to do. Some feel there is no wrestling needed—either because they feel bound as a core matter of faith to accept every line of the Bible as having timelessly equal ultimacy, or, the opposite, to see the Bible as more of an ancient relic devoid of spiritual substance and critique.

I want to suggest, though, that the Christian way, beginning with the earliest theologians of the church, has avoided these two options. We’ve been wrestling with the Bible for a very long time, as have Jews.

And that wrestling continues today—especially this morning.